The Brighter The Light (Single)

by The Juan Maclean 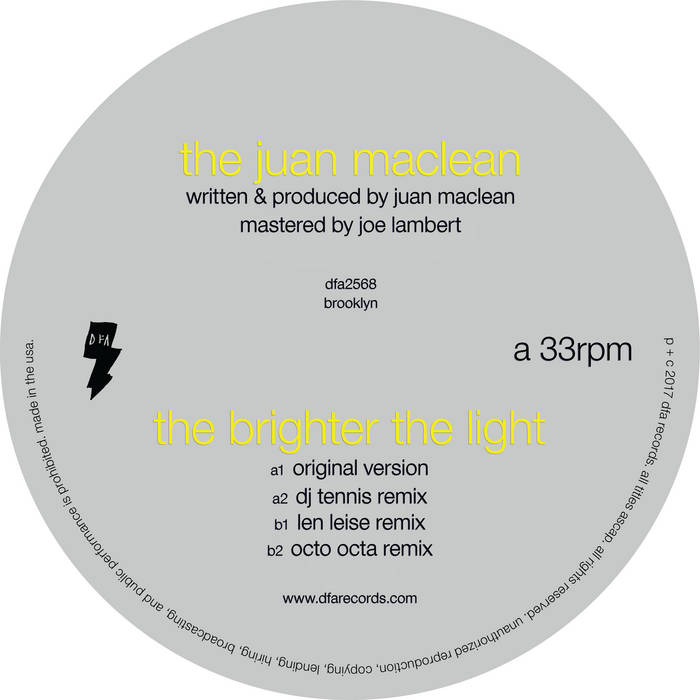 Juan Maclean is a Brooklyn-based DJ and producer who has been a mainstay of the New York club scene, as well as maintaining a rigorous international touring schedule, since the release of his first records on DFA in 2002. After putting out an extensive catalogue of 12” singles and LPs for the label with vocalist Nancy Whang (most recently, 2014’s In A Dream LP, and this year’s 12” single ‘Can You Ever Really Know Somebody’), he returns to the label with ‘The Brighter The Light,’ a deep piano-based club track, augmented by three equally DJ-friendly remixes.

“The Brighter The Light” emerged while Juan waits (somewhat) patiently in Brooklyn for Nancy Whang to return from touring with her ‘side gig,' LCD Soundsystem. Taking the tiniest splice of a demo vocal and sprinkling it throughout, Juan spun off the work being done for the next LP and created a new piece altogether, offering the smallest glimpse of what is to come, but ending up with something with a completely different purpose: his DJ set.

The remixes are a truly euphoric bunch of tracks, coming from Australia’s Len Liese (yes his remix is Balearic AF), DJ Tennis, (fresh from his fantastic DJ Kicks released in July) and Octo Octa, who contributes her second remix for The Juan Maclean (look up her remix of 'Here I Am' from 2014, it’s brilliant).

There are already two more singles being planned (with a similar club-driven purpose) to tide over fans and DJ sets while Juan and Nancy finish work on their fourth LP, to be released in 2018.

Bandcamp Daily  your guide to the world of Bandcamp